Manic Monday: What do you mean your sold out!

Remember the Christmas debacle that was Tickle me Elmo? Well, it appears Dance Star Mickey is poised to be this years hottest Christmas toy! And of course, I want one, no, need one! I have been looking everywhere for the infernal thing, checking each time I visit any major retailer that would sell such an item. Never was I concerned until last night. I decided to check online, thinking it wouldn't be a problem. Walmart, sold out; Target, sold out; toys r us, sold out; Disney Store, sold out, all with no indication of future availability. I eventually find it on Amazon.com, marked up 50%!!! Seriously!? Then my marketing education kicks in and I realize exactly whats going on.

Once an item is touted as being the next big thing, the hawks swoop in. They quickly buy up all available inventory at it's original MSRP, or even a sale price. Once the general population gets excited about the product and is ready to buy, it's near impossible to find. And queue hawks. All the sudden the product is in ample supply again, but not through the average retailer. Instead, they are being sold through independent retailers you probably have never heard of. And you guessed it, the mark-up begins. In general, mark-up starts at 25%, but as supply stays low and demand increases, mark-up continues. To date, the mark-up is over 50% and estimated to rise. We are talking about a toy that original sales for $59.99, being sold for $96, and on one site, $199.99, crazy!

I have to say this, if Mickey should dance across my path this holiday at it's original price, I will be buying! Not only that, but Mickey will go on e-bay one week prior to Christmas and I am going to try my hand at this game! Then again, I am not very good at taking advantage of people. I will keep you posted. So, final thoughts; Marketing genius, or sticking it to us?
Posted by DisneyFaith at 11:59 AM 2 comments:

This week I had the privilege (not!) of serving as a defendant in what was nothing short of an egregious lawsuit. I have long been baffled at how this suite was allowed to make it into a court of law, but it did, and I had to face the music and go dancing in a minefield. I will spare the details of that day, eight years ago, when I unfortunately was not able to maintain control of my vehicle. With less then desirable road conditions, I caused an accident. The short of it is, I ended up being served a lawsuit by an alleged passenger I vehemently assert was not even in the vehicle! Therefore, I digress in regard to the accident itself.

So, eight years and three days later...here we are at trial. I must say, in hindsight the process is fascinating. I am told pre-trial; "you are on parade, be polite, look nice, but speak to know one about your case!". With potential jurors arriving for qualifications, it was imperative I keep a distance and not divulge any information. The courtroom was just like something you would see on a TV program. Dark woods, low lighting, a jury box to the side of the witness stand, the plaintiffs table, the defendants table, it really was like a scene out of a movie. My case was first on the docket, so I was already seated at the defendant table with my attorney when the potential jury was brought in. First, the judge gives his speech about service and duty. Next, each juror must stand and provide just a bit of background information. Then, additional jurors are disqualified by exercising their exemptions. Finally, it's time for selection. Once we have our jury and a few housekeeping issues are resolved, we can begin. Plaintiff is first on the stand. Next, a doctor of questionable character. And that's was it for day one! Day two brings more doctors and another witness of questionable character. And the plaintiff rests. Time for the defense to take the stand...yikes...that's me! Although confident, I am still anxious to have to be on a witness stand! My testimony goes well, I even get off the stand to draw a diagram in front of the jury, remembering to always look and speak to them, not the judge, not the attorneys. Here comes the cross examination, this is what I am nervous about! I just watched my attorney respectfully shoot down the plaintiffs case. Yet, it was not in the least bit confrontational. Never was I asked anything that would "trap" me into contradicting myself. Never was my character brought into question. Never was I caught off guard. Of course, the burden of proof lies with the plaintiff, not me. Still, I really thought I would be left in tears by the end.

Time for the deliberation. Seventeen minutes after the jury is excused, they have a verdict. I over hear the plaintiff's attorney say, "that was too fast". The foreman must pass the verdict sheet to a court official, who hands it to the judge, who then reads it aloud. It's a defense verdict! Yay! And that's it...after three days away from my family and eight years of having this on my mind, it's over. Anti-climatic, really. So, as always, I want to take the positive from this and reveal in a new experience I can add to my schema. Of course, this is hindsight talking.
Posted by DisneyFaith at 12:07 PM 4 comments:

The Wonderful World of Wednesday 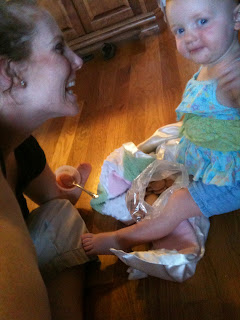 The highchair boycott. Lunch on the kitchen floor
Posted by DisneyFaith at 1:16 PM No comments:

F is for Friday!

Today, F is for.....(drum roll)..... Fitness! I am pretty sure it's not a secret to anyone who may read this that I teach Group Fitness classes. Having this background puts me in a unique position of being able to share information I have regarding health & fitness. I have several interesting tips I am excited to share with you on fitness day's, but the first one will help lay the ground work for any health and fitness plan. Weight loss, weight gain, and weight maintenance is all about balance and numbers. Too many numbers go in, not enough numbers go out, and up your number goes. Conversely, when you lower the numbers coming in and increase the numbers going out, your number will go down. So, to help you get started ,here is an algebraic equation on helping you figure out how many "numbers" you need coming in. And by "numbers", I mean calories! Here is the Harris Benedict Equation to calculate your caloric needs.

Step 2. Now take the number from above and multiply by the level of exercise listed below.

Step 3. The number you have now is your caloric need to maintain your current weight!
- For weight loss, subtract 500 calories per day from your current number.

* Remember to solve for the parentheses first.

Clear as mud, right? Now, this is just the ground work. The first step is to get moving and to know your numbers. Obviously, not all calories are created equal. If you need 1250 calories a day to loss 1-2 pounds a week (the safe and permanent way!) you can't eat 1250 calories in snickers and see the results you want. So, this is a tease, in hopes you will check back and learn a little more about how you should fill these numbers. TTFN!

Are you thirsty? Do you drink and yet feel no satisfaction? Do you try something new, hoping this is the thing that will quench that deep thirst you have, a thirst you can't even define? Obviously, this is a metaphor for something more than literal thirsty. I am talking about the thirst you have in your life for something greater then yourself, yet you don't know what it is, or where to find it. We submerse ourselves in activities, maybe a new adventure, or new job. Heck, maybe it's even into a mouse ;) And we are satisfied, for awhile, but the thirst comes back. I do know this, I know exactly how to quench the deeper, longing, needing of something bigger, permanent, dare I say, eternal. And yet, I find I often step away from my well. I want to try a new drink I say. Maybe this; more fitness classes, or that; the Disney Moms Panel (don't get me wrong, I am still applying again next year!). I find they only serve as distractions, leaving me dehydrated, literally. So, as I regroup ,I return to the well and remind myself of this....

Jesus stood and said in a loud voice, ‘If anyone is thirsty, let him come to me and drink. Whoever believes in me, as the Scripture said, streams of living water will flow from him.’” (John 7:37)

Get my drink...er..uh...drift? That thirst is a longing for God's word. I know we are not all at the same drinking fountain with this, but only quenching ourselves with water of the world will never provide the lasting fulfillment we are looking for.

So, "seek your hearts and check your cups, pursue your dreams, but don't forget to look up".- Faith Dority

Now, go take a drink and thirst no more.
Posted by DisneyFaith at 12:08 PM 2 comments:

So what can you expect from the Tuesday Two's? Well, for one thing it is the second day of the week and a pretty boring day in my book, it's just....blah! You might find some tip on making Tuesday exciting for you and your significant other, oh la la. Of course, surprising the kiddos with a fun dessert might brighten the day up. Other Tuesday Two's you might encounter, funny anecdotes on life with my youngest, Brooks, when at 18 months I see signs of the terrible two's on the horizon. And the older two are always good for a funny story. Whatever the focus of this most nothing day, expect it to follow the theme of two's. So stayed tuned and learn how we make the second day of the week one to actually look forward to. In closing, here is today's thought on something two.....

STEPS IN PREPARATION:
1. Preheat oven to 350 degrees.
2. Combine all ingredients. Knead mixture with hands until well blended. Pack into loaf pan.
3. Bake for 2 hrs. If desired, pour 1/2 cup tomato sauce over top of loaf before baking.

Serve with steamed broccoli to keep your meal low-carb, or my favorite, crock-pot mac-n-cheese.

Usually yields 8 servings. Keep your portions small and use the leftovers for the next nights dinner. Buy a loaf of crusty french bread, add marinara, mozzarella,and voila, you have meatloaf subs!

Monday's don't need be manic, with a little extra preparation and planning a meal that can serve
double-day duty, you can keep the peace and start the week off right. We all know enough challenges will come during the week!
Posted by DisneyFaith at 1:03 PM 3 comments:

DisneyFaith
I am a mom of three beautiful children; one Prince, two Princesses. Married to my high school sweetheart and can't believe how fast time has passed! I enjoy staying home with my children, coupled with being a Nationally Certified Fitness Instructor, teaching a variety of formats, five days a week! In addition, I am a 2nd grade Sunday School Teacher, love those kiddos! We are a busy family always counting down to our next Disney vacation. Lastly, this mama is a Princess, too, because I am a daughter of the King!